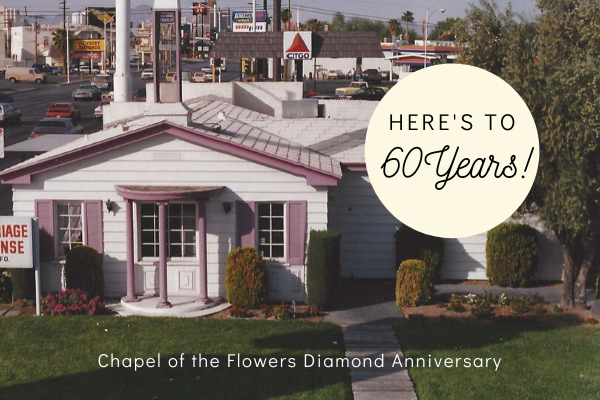 Chapel of the Flowers is turning 60!  Since 1960, our iconic Las Vegas Wedding Chapel has been marrying couples from around the world, and we want to celebrate our Diamond Anniversary with all our lovely couples and social media followers! We want to thank everyone during our 60th Anniversary by offering exclusive promotions and contests available throughout 2020.

Over the years, Chapel of the Flowers has transformed into an elite wedding chapel on the Strip, known for its exceptional customer service and full-service wedding packages. Chapel of the Flowers wouldn’t have made it to 60 years without the love and support of the amazing couples who have visited the destination to tie the knot and renew their vows.

Chapel of the Flowers History

On March 14th, 1960, Chapel of the Flowers (originally named “Little Chapel of the Flowers“) opened its doors to the public as one of the first free-standing chapels on the Las Vegas Strip. Over the years the chapel has undergone numerous renovations, expanded to 5 ceremony locations (including the popular rustic-chic Glass Gardens), has been featured on TLC and Good Morning America, had a few celebrity sightings (including Vegas Golden Knight, Ryan Reaves, officiating a ceremony), has been featured in music videos for artists such as Carrie Underwood and Rascal Flatts, and has won the Las Vegas Review Journal’s Best of Las Vegas award as the “Best Place to Get Married” in Vegas several times!

Fast forward to 2020 — over a quarter of a million couples have been married at the Chapel, which continues to win awards and raise the bar for what a Vegas Wedding Chapel should be.

If you are interested in booking a wedding package or one of our 60th Anniversary Promotions, feel free to chat with our Venue Specialist on our website.