Best “How did you meet story?” EVER! 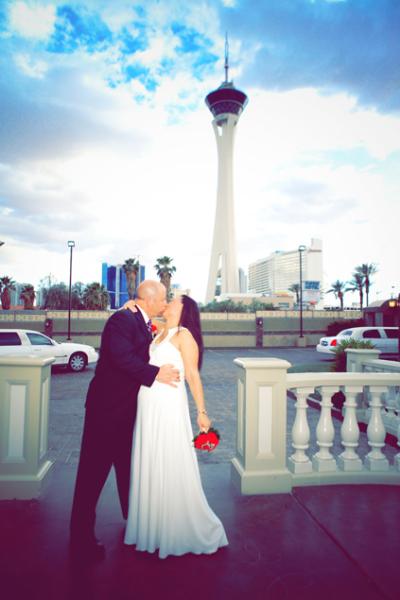 Duane and Vicki were married in our Victorian Chapel on an early Thursday evening. It was just the two of them along with Vicki’s parents in attendance, a very intimate and classy affair.

While I was escorting them to meet with their minister, they told me the story of how they met. Duane said that they had been together for 5 years and they first met while both were visiting Las Vegas. Duane was visiting from Utah and Vicki was visiting from Seattle. Duane was in a casino and wanted to play BlackJack and he went to a random BlackJack table and sat down and met Vicki. They made small talk while playing and then went their separate ways. About a year later, Duane was walking through the same ca sino and wanted to play some BlackJack. He sat down at the same table in the same chair and looks over, and there is Vicki. He says “Don’t I know you?” And after striking up a conversation realizes that they were both at this same BlackJack table playing BlackJack in the same seat, one year prior. WOW! They began a long distance relationship and here they are, years later, getting married. What a wonderful story. Congratulations Duane and Vicki and I wish you many years of happiness together!

Chapel Marketing Visit Website
Award-winning Chapel of the Flowers has provided traditional, intimate and elegant Las Vegas weddings on the world-famous Strip for nearly 60 years. It is a full-service wedding venue, with three elegant wedding chapels as well as a beautiful outdoor gazebo and glass garden. Its cobblestone-accented grounds and lush landscaping create a variety of options to capture that picture-perfect moment. The chapel’s professional wedding planners work with couples on a daily basis from one-year out to day-of planning.
Related Posts
A Fairy-Tale Destination, A Wedding at the Valley of Fire
Butterflies in my tummy…
FAMILY MATTERS
Blog Categories
Past Blog Posts
Search Blog
About Us
Recent Posts
Customer Reviews
Copyright 2021 Chapel of the Flowers