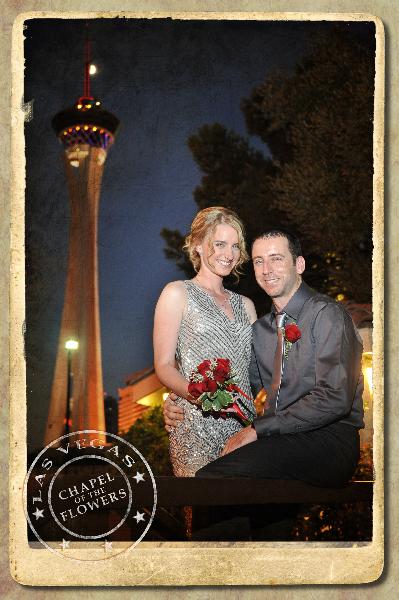 Trenton and Karina Laurance were on vacation from Carlton, Australia. They first visited Trenton’s brother in New York, and then decided to visit Las Vegas. One night, before going to see Penn & Teller, Trenton took Karina to a very nice dinner. Little did she know that he was about pop the question. As they were eating dinner, he simply asked Karina if she would marry him! Needless to say, she was super surprised and automatically said ‘YES!’

Trenton told Karina that they were not going leaving Las Vegas until she married him, so as soon as they had a chance they started planning their wedding. They decided to get married on their last night in Las Vegas, which was on July 7. In addition on their wedding anniversary now being on July 7, it is also Trenton’s birthday! What a very special and memorable day for the both of them!

The couple did not tell any family or friends back at home. In fact, as soon as they get back to Australia, they are going to send out a mass text message to everyone saying that they got married! This way, everyone will get the text message at the same time and there will be no hard feelings. They also plan on having two parties celebrating their new life together.

Trenton and Karina have been together for four years, and have now tied the knot in a very non-traditional way that they both love! We wish them much happiness together.