Rizaldy and Chona Villegas have been married for 20 years, and they decided to renew their vows at Chapel of the Flowers on Saturday, July 16th. They were joined by 70 of their friends and family members. Since so many loved ones attended their ceremony, their bridal party was forced to stand throughout the entire ceremony because there was no room to sit! They had a large bridal party, which included their four children. All the ladies wore hot pink dresses, and the boys had matching tuxedos on. Everyone was dressed to the nines! Ian and Barbara Wightmore got married in the Victorian Chapel, on Saturday, June 18th. The couple was accompanied by their closest family members, such as their parents and their two lovely children. Randy and Yvonne Bunker got married in our La Capella chapel! They wanted the deluxe first look which means that the bride and groom don’t see each other until the ceremony starts. I could tell that Randy and Yvonne are in love. I met both of them separately and they just fit together so perfectly. Their excitement for their wedding and new chapter in their life was definitely visible in both of them. Gary and Teyawnna Sanden were married on May 21st, in the Magnolia Chapel. Diana and John Oldridge were married here at Chapel of the Flowers 25 years ago! Then, exactly 25 years later, they came back to Las Vegas to renew their vows. Brad and Tiffany had an amazing wedding this past Saturday on 12/11/10. It couldn’t have been more perfect. They had a memorable date and had custom designed the chapel to exactly how they wanted it.

20 years and more to come

Enjoying their first 20 years as a married couple with a terrific family, Toni and Anthony traveled from New York to share a renewal of vows ceremony.

On August 9, 2010 I had the pleasure of meeting a wonderful couple. Randy and Amanda were so excited to be getting married! I met them in reservations and while walking back to the chapel I got to know how they met. They met through an online dating site called eharmony. They informed me they only have been together for a little over two months! I would have never guessed because they were so in love. They looked like they have been together their whole lives. Amanda read on Randy’s profile that he 3 boys, all grown, that attend college. Amanda also has a son and would be attending the same college as Randy’s boys this fall. Once she read that she knew she had to talk to him. They spoke every night for 3 or more hours on the phone. Randy flew Amanda out to California from Texas and he told me once she got off that plane he knew he wanted to spend his life with her. Amanda went back to Texas, left her job, packed her stuff and moved to California to be Randy. They decided to get married here in Vegas at Chapel of the Flowers. They wanted a romantic ceremony that only involved them two! All 4 boys watched online as there families became one!

Thank you Randy and Amanda for letting me be part of your special day! I really enjoyed hearing your story! Best of luck!

Shared wedding experiences are always special to families. Brittany Wilkerson didn’t need much influencing to use the Chapel of the Flowers for her wedding site. Her parents were married here at the chapel 25 years ago and enjoyed their experience so much that they wanted their daughter to share in that joy. 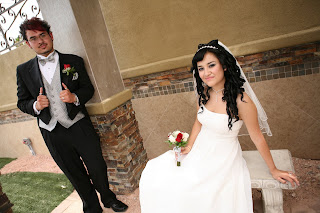 It was the day that Thelema Medrano and Enrique Flores were to be married. Thelema and Enrique had chosen to have a First Look Service. With this type of ceremony neither the bride nor the groom see each other the day of the wedding.