Around the Chapel, Las Vegas Weddings at The Chapel, Wedding Trends
1 0 Share 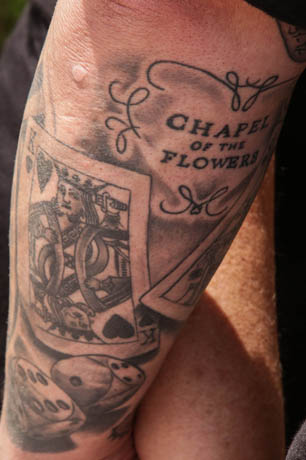 Chapel of the Flowers is accustomed to seeing couples who exchanged vows stop by and take pictures when in town to celebrate an anniversary or show friends the chapel where they married. What the Chapel was surprised to see this past weekend was a groom who loved his Las Vegas wedding experience so much that he tattooed the company’s iconic logo on his forearm to forever remember the day he and his wife celebrated their wedding.

John and Vicki Harris wed at Chapel of the Flowers three years ago and paid a surprise visit to the staff to share their story. The groom, John, has documented his love story with his bride, Vicki on his arm and has added tattoos of various landmarks to commemorate their milestone dates. On his elbow and “sleeve” are fireworks to represent their first date. John said that their most memorable date, the day of their wedding on March 31, 2012, is now represented by a tattoo of the Chapel of the Flowers logo.

“Would you get a tattoo of a company logo?” BBC News business reporter Will Smale posed this question to readers in 2014 and shared that over 2,000 workout enthusiasts from around the world did indeed tattoo the logo of the popular gym Anytime Fitness.

The answer to the BBC News reporter’s question is “yes” according to John Harris. And now this very happily married man, with a logo of Chapel of the Flowers, is added to the list of customers who did make the ultimate commitment to a beloved brand.

Thank you, John and Vicki Harris, for thanking us in such a significant way. The entire staff at Chapel of the Flowers is humbled and honored by your show of appreciation. 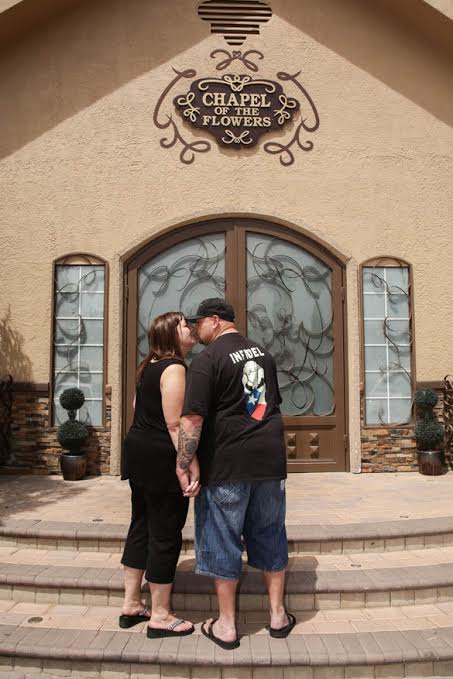 Chapel Marketing Visit Website
Award-winning Chapel of the Flowers has provided traditional, intimate and elegant Las Vegas weddings on the world-famous Strip for nearly 60 years. It is a full-service wedding venue, with three elegant wedding chapels as well as a beautiful outdoor gazebo and glass garden. Its cobblestone-accented grounds and lush landscaping create a variety of options to capture that picture-perfect moment. The chapel’s professional wedding planners work with couples on a daily basis from one-year out to day-of planning.
Related Posts
Engagement and Wedding Ring Trends at Las Vegas Wedding Chapel
Feelin’ Lucky in Vegas
7 Fun Date Ideas to do at Home
Blog Categories
Past Blog Posts
Search Blog
About Us
Recent Posts
Customer Reviews
Copyright 2021 Chapel of the Flowers